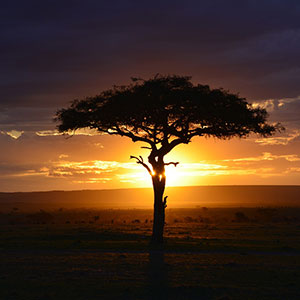 On this magnificent Kenya safari, visit remarkable national parks and wildlife reserves in search of giraffe, cheetah, zebra, leopard, lion, elephant, rhino, gazelle, hyena, Cape buffalo, and more-all in their native environments. Imagine the thrill of seeing these majestic animals as they sunbathe on grassy land and roam across the vast savannah grassland. And with no more than 6 guests per vehicle and 20 guests total in each group you’ll experience distinguished service by your professional Tour Director and experienced Driver/Guide.Your safari adventure starts in Samburu National Reserve, where you’ll have the chance to see rare animals not spotted in other parts of Kenya. Commonly referred to as the Samburu “Special 5,” they include the Grevy’s zebra, reticulated giraffe, Somali ostrich, Beisa oryx, and the gerenuk-a long-necked antelope that feeds while standing on its hind feet. Lion, cheetah, elephant, and Nile crocodile are also commonly spotted here. You’ll also spend two nights in Maasai Mara National Reserve, Kenya’s most famous game area. In addition to several game drives here, you will also enjoy an exclusive bush breakfast-a unique experience offered by Globus! In Nairobi, you’ll visit the Giraffe Center focused on saving the Rothschild’s giraffe; the Karen Blixen Museum, dedicated to the author of Out of Africa; and the Sheldrick Elephant Orphanage, an acclaimed project that rehabilitates orphaned elephant and rhino calves and reintroduces them to the wild. Here, meet the cute babies and learn about important conservation efforts. Other highlights include Ol Pejeta Conservancy, the largest black rhino sanctuary in East Africa, and Amboseli National Park, known for its large elephant population and spectacular views of Mount Kilimanjaro. All of this and more await you on this amazing Africa safari vacation!

Prices are per person, land or cruise only, based on double occupancy. Offer subject to availability and change without notice. Some restrictions may apply. Please ask us for details.

Charges not included in the land vacation price: airfare to and from the start of your vacation; airline baggage fees including checked and/or excess baggage fees; Federal inspection fees for the Federal U.S. Customs and Immigrations; agricultural tax; other per person taxes imposed by government entities; applicable cruise taxes, fees, fares and port charges; passports; visas and vaccinations; transfers; tips to your Tour or Cruise Director, Local Host, driver, Local Guides, and/or ships’ crew; gratuities on ferries, trains, and cruise ships; laundry; telephone; minibar; alcohol, beverages, and food outside of the contracted menu as presented at a hotel or restaurant (these extra items will be billed to you before leaving the hotel, ship, or restaurant); additional excursions and activities not listed as ‘included’ in the itinerary; porterage at airports or train stations; Travel Protection premiums; and all other items of a personal nature.

Click on the buttons below to request a quote on this deal or contact us directly with further questions or comments.

Request A Quote Send To A Friend Have A Question? Contact Us

Send To A Friend